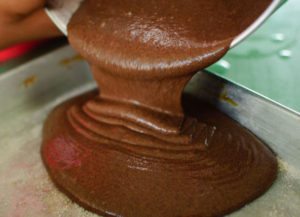 Once upon a time, “Mary” wanted to make a special dessert for her four amazing friends who were coming to lunch. She decided on a chocolate cake, because everyone likes chocolate, right? The recipe called for  one cup of sugar….hmm, that didn’t seem quite enough, anyone knows that cakes should be sweet, and one cup of sugar for that whole big cake could not possibly be enough. Two cups would be better. Also, though the cake called for self-rising flour, the only flour “Mary” had on hand was all purpose flour…same thing, right? No problem. As she was mixing the ingredients, she remembered that Suzanne really loved pecans, so she added pecans. A lot of them. Yum. According to some swift calculations, two 8″ round pans would cover roughly the same area as one large rectangle pan…or close enough, anyway. As she was pouring the batter into the pan she thought about how impressed her friends would be with her baking skills. “Mary” is not known for her desserts, but she is the kind of person who likes to overcome challenges. Like following directions that seem a bit restricting. When the cake came out of the oven it looked fine but a little, well, flat. Probably because she had not added the icing. “Mary” congratulated herself on her foresight to buy 2 tubs of buttercream chocolate frosting. That first tub really built the top of the cake up to the height of “store-bought” cakes.  Now it looked normal!

Well the lunch was wonderful, and then it came time for dessert. Well, you can probably guess the rest. The icing cake, as it came to be called, was too sweet. Even for Suzanne, who is trying to cut out sugar as it turns out. Not only that, but Patsy couldn’t eat it because she cannot eat glucose. Kamela can’t eat chocolate, and sadly Katy is allergic to pecans. “Mary” had to agree that the cake was a flop, and though her friends appreciated the effort, no one could eat it.

Often, when I am working on a design project for a business, and I ask, “Who is your market, who are you trying to reach?” the answer is “Everyone or anyone“. Well, business networking coaches will tell you that this is the same as “no one“.

One design, one message will not, cannot appeal to everyone. This is why a design strategy is so important. Multi-tasking in design does not mean trying to reach everyone and tell them everything at once (no one can take in that much sugar at one time). Rather, it means having specific goals targeted to specific people. “Mary” would have served her friends much better is she had made a sugar-free nut muffin for Suzanne, a gluten-free muffin for Patsy, a plain chocoate muffin for Katy and a pecan muffin for Kamela. To do that, she would have had to ask questions before she went to the store to buy the ingredients. She would have learned a little more about her friends, and been much more intentional when she selected and mixed the igredients. Imagine how delighted her friends would have been had she presented them each with a muffin that showed clearly she had been listening to their input. Later, what do you think the friends would have remembered about that lunch; the chicken salad everyone ate, or the special muffin made just for them?

So the making of these muffins would have accomplished three tasks at least. One, “Mary” would have learned more information about her friends (and hopefully improved her baking skills); two, her friends would have felt appreciated and valued… and three, the relationship between them would have been truly deepend and strengthened.

THAT is what design strategy for your brand should do…multi-tasking at its finest.

Next month we will look at how design can help your brand achieve these same three tasks.